By the end of this lesson, you will be able to:

When we’re working with git and GitHub, we usually have 2 repos that represent the same codebase:

Local repos live on our machines and allow us the full benefit of git’s version control.

In your terminal, create a new directory and cd into it. Now run git init – you’ve just created a local git repository!

We have no remote repository associated with this local git repository just yet, it simply lives on our machine and gives us all the version control features of git. So if you were to add files to this directory, we would be able to track any future changes to them.

Add a file to your directory, then run a git status. You should see that you have a single untracked file. This means that git can tell there’s a file in your current working directory, but it’s not keeping an eye on it yet. We haven’t told git that it’s important.

If we follow the instructions here and we do a git add, we see that file is now highlighted in green instead of red, and git is now aware of it as something that can be committed. This phase right here is called your staging area. It holds onto any file changes that you are considering committing to your local git repo. Notice if you do a git log, you still don’t have any commits to you local repo, so your local repo is still considered empty right now. If we were to try to push this up to GitHub somewhere, nothing would appear.

Given the workflow we just walked through, we can identify 3 separate environments or phases of working locally: 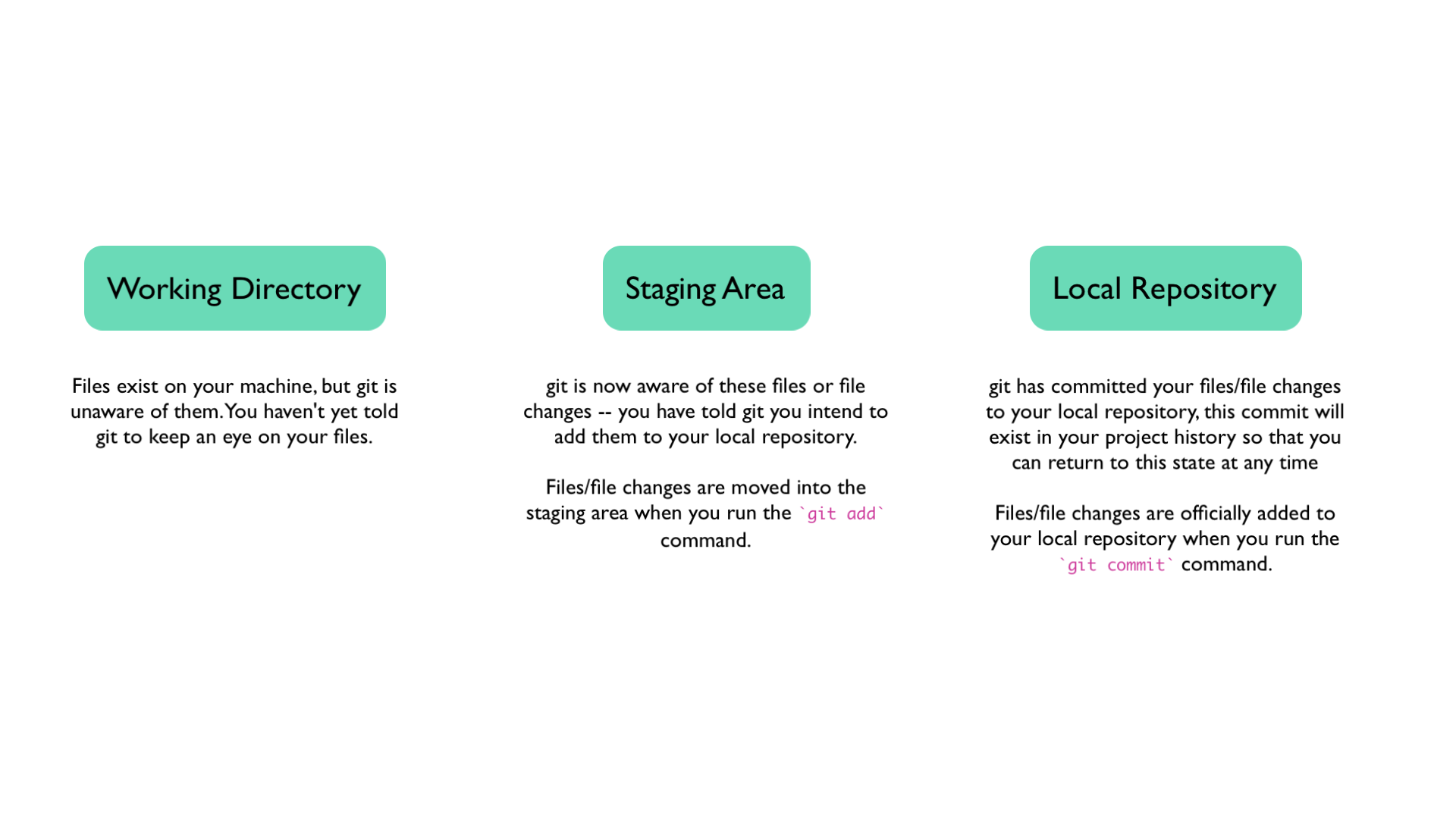 So the important thing to remember here is that your files aren’t actually considered to be a part of your local repo until you’ve committed them.

Though local repos provide you with full-blown version control, there are still some limitations:

So, we often link our local repos to a remote repo! Remote repos:

Usually the default remote name is origin - which is how we get the command we’re most frequently running: git push origin master.

Most frequently, you’ll be working with one local repo linked to one remote repo, but we can actually have as many remote repos as we want, as long as they all have their own unique names. (e.g. we could add a remote called ‘turing’ by running git remote add turing <url>).

You won’t come across a ton of scenarios where you’re going to be pushing and pulling from multiple remotes, but it’s important to remember that it doesn’t have to be a strict 1-1 relationship between a local and remote repo.

Now that we know the difference between our local and remote repos, let’s talk about the two ways we can get a copy of a remote repository: cloning and forking. These work in slightly different ways.

Cloning a remote repositoy copies it to your machine as a local repository. When you clone a repo, the local repo it creates is automatically mapped to the remote (origin). Your local copy will have access to all of the branches that exist on that remote repository.

While cloning allows you to copy down the original repo, if you are not a collaborator on that repo, and you want to push any local changes you’ve made to GitHub, you’ll have to create a new remote repository to push them to.

Which brings us to…

Forking creates a brand new remote repository on your GitHub account that’s a copy of the original. In order to work locally, you would then want to clone down your forked version of the repo. The forked version is now your origin remote where you can push and pull your local changes.

In order to keep up with (pull down) any future changes that occur in the original repo, you would need to add a remote link to that repo that your local copy could access. We can accomplish this with the following command:

We could then pull down future changes like so:

If you want to checkout a new local branch, based on an existing remote branch, you can then do: 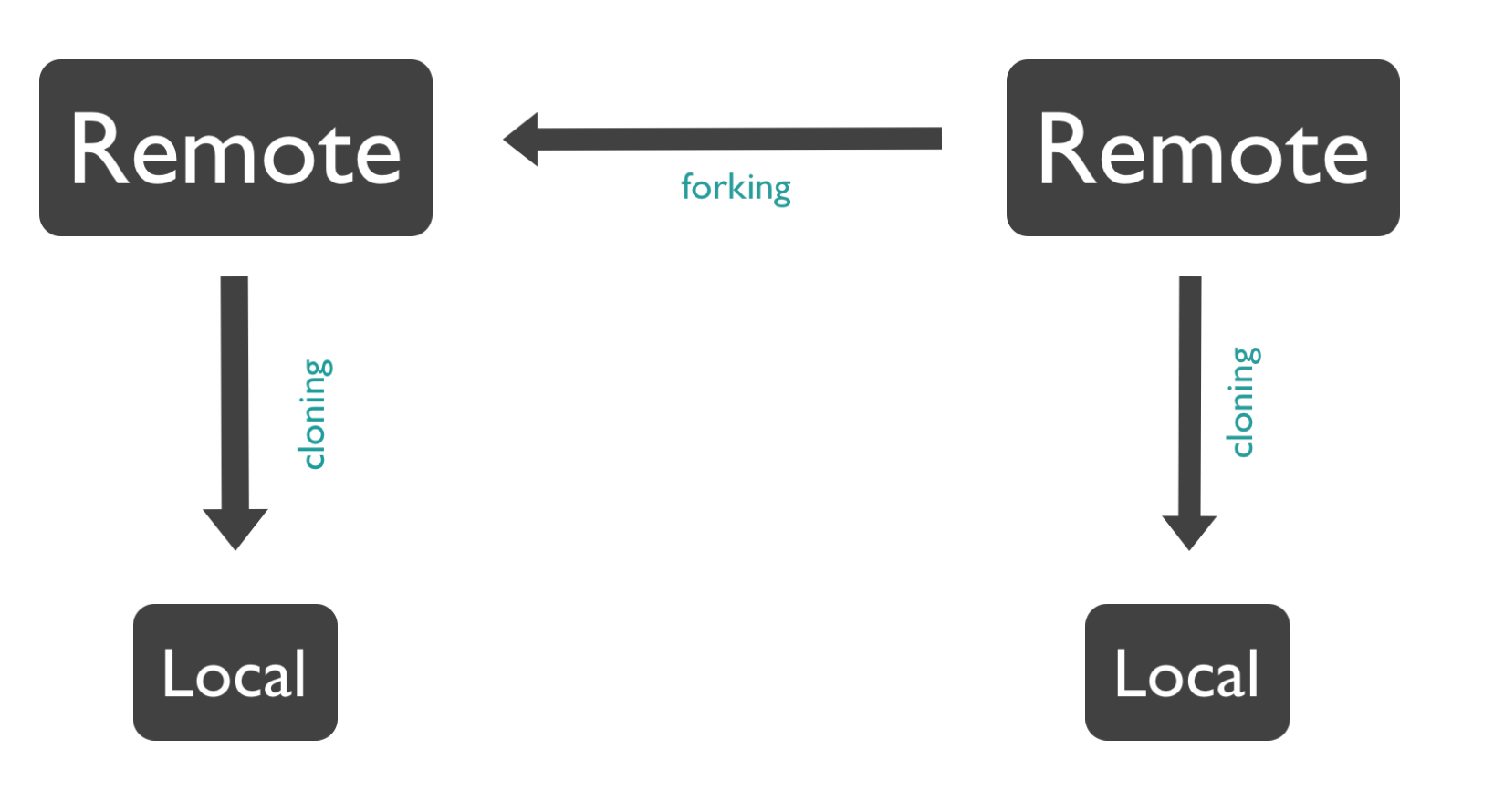 How to Choose Between Cloning and Forking

Let’s say an instructor has created a repo for a live coding lesson that lives at http://github.com/turing/foo-bar, and there are two branches on that repository: tutorial-begin, where everyone should start, and tutorial-complete, with the completed solution.

If you clone down this repo, you will have access to both of those branches no problem. But now you can’t push your changes up to github because you don’t have collaborator access to that repo. If you’d like to be able to show your changes on your github, and keep track of your own version of the repo, a better workflow would be to fork.

Your workflow would involve a couple of steps and look like this: